I came across an interesting blog post today, where Matt Brunt set up an integration between IFTTT and Monzo (a UK bank) to help save money. So that every single time he tweeted, 20p would be transferred into a separate pot on his Monzo account, which itself would be locked away until just before the PS5 release date.

As soon as I read the article, I was instantly struck with ideas on how I could make use of a similar integration.

Personally, I don't have a big problem with being able to save money. I have a structure to my savings, and I'm very strict with myself to make sure I separate a portion of my wage every time I am paid.

What I do have a problem with is choosing when to spend money. I mean to say I have so much money I don't know what to do with it. I wish. But in general, I have a problem associating value to a purchase. For example, I purchased an iPhone 12 not long ago, but I probably wouldn't spend over £15 on a t-shirt, or even £60 on a pair of shoes. Whereas there are a lot of people that see enough value in a pair of shoes to spend quite a lot of money on them.

I tend to place a higher value on computers, whether it be a smartphone, tablet, or real computer. The main reason is that it's what I'm interested in. But I also use these products as tools in my life, and also to get work done. I use these products to develop apps, write for this blog, and the usual stuff like gaming and social media.

You'd think I'd be fine spending money on new iPhones, iPads, and Macs. But instead, the "normal" part of me usually decides that a new device probably isn't worth it, since a lot of times the current device can cope with what I'll end up doing on it. It's the reason why I own an iPad Pro 10.5", even though I've been wanting a 12.9" pro ever since they were available. I must admit, I was close to buying the model that came out earlier this year, but it didn't seem like a big enough update to force my hand.

But I still have that constant thought in my head that I need that 12.9" iPad Pro, and especially the new Magic Keyboard. Although to be fair, I don't need it, no-one needs an iPad. I want it, for quite a few reasons, but that's not relevant here (I've already dragged this out too far anyway). Let's now get to the point.

There would be no point of all this fuss if I didn't have some kind of goal, or to be specific, an amount of money I want to save. So the goal I'm setting myself is enough to buy a 12.9" iPad Pro (I guess that should be obvious by now). The model I want will be around £1000 I reckon, so that will be my target.

Alongside the iPad, I will also want the Magic Keyboard to do my writing on. But I'll leave that as a secondary goal to do after if this one goes well.

In the article by Matt Brunt, he set up an automation as a fun way to put some money away. But I've also seen other people in the past use it as a punishment, where they track some performance metric, and if they don't hit it then some money gets donated to charity (or somewhere else). Or others that use it for saving may use an environmental action to trigger the saving, something like every time it rains, a tiny bit of money is saved for a future holiday.

I have a theory that this automated saving technique could be used as an incentive, rather than something negative. Instead of punishing bad behaviour by putting money away, I plan on rewarding good behaviour by allocating money towards something I want to buy.

In this case, the reward will be buying an iPad Pro for myself, and the behaviour I want to use as the trigger will be publishing blog posts.

To me, this seems like a perfect fit. I want to get myself into a habit where I'm writing at a good pace, and regularly publishing to my blog. And I'd really love to eventually be doing that on the big iPad. So while I'm building up a habit, I'm also going to use this experiment as a way to prove to myself that I do actually want to write "long-term" and it's not just an occasional hobby.

For the automation, I'll be using a combination of the blogs RSS feed, IFTTT, and a specific pot in Monzo with an associated goal (Which has a cool image that I built using Robb Knight's tool, and is the featured image of this post).

It's a pretty simple process. Whenever there's a new item in my blogs RSS feed, money will be transferred into my pot in Monzo. Eventually, I'll hit the target, I'll order the iPad, and all my life's worries will go away (I think this is how it works?).

I've chosen the amount to be £1 per blog post, so it's pretty easy to calculate how many I'll need to publish before hitting my goal. 1000.

I had an idea on somehow basing the amount on the length of the post, or if it's a simple link post, but I think if I add to complex I probably won't ever complete it.

Anyway, this post will serve as the first out of 1000, and will fortunately/unfortunately cost me £1. Which means I've now got to go and write and publish another 999! Wish me luck. 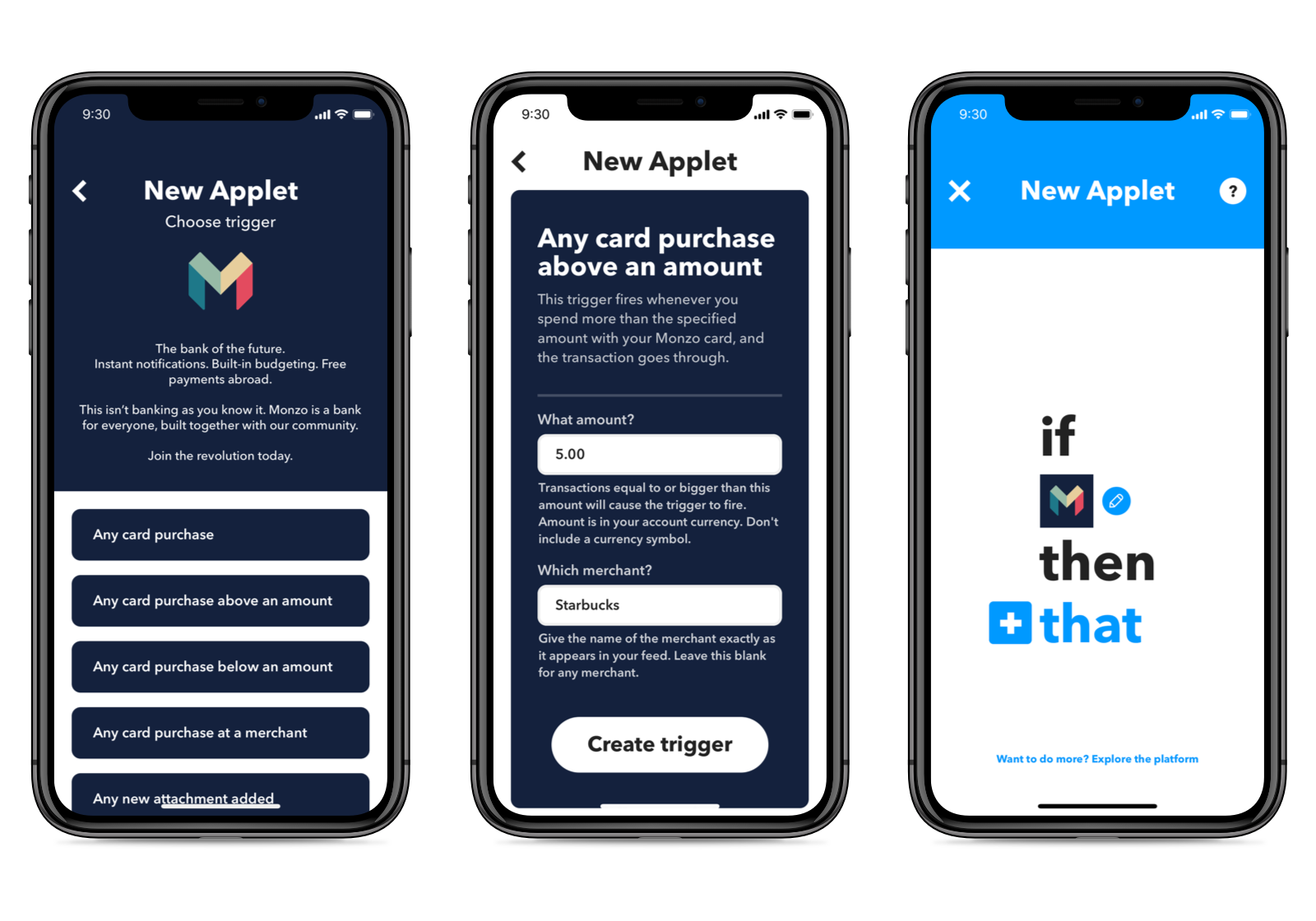 We believe that a truly smart bank should empower people to manage their money in a way that suits them. Today, we’re proud to announce that we’re the first bank to partner with the world’s largest automation platform — IFTTT!

In a nutshell, IFTTT lets you personalise how you manage your money. You can create your own rules, called Applets, to connect your Monzo account to the services you regularly use. For example, say you use the iOS Health app to log your calories. With IFTTT, you could enable our pre-made Applet that means every time you buy anything at Starbucks, you’ll automatically log 200 calories on iOS Health.

Yet nother reason why Monzo is the best bank in the world.

In the latest update of the Monzo app , they’ve introduced a bill splitting feature, that is a cut above the rest. With the information that Monzo can already calculate form your transactions, such as the location, restaurant name, and even storing receipts, this feature simply makes sense.

How To Use It

Simply find a transaction in your Monzo app, and then select Split Cost Using Monzo.me. You’ll be presented with a list of options, where you can quickly share the bill with 1 to 4 other people, or you can also set a custom amount to request.

Once you’ve selected an amount to request, you’re presented with the standard iOS Share Sheet, and this means you can send it wherever, and however you like! Whether it’s through iMessage, WhatsApp, or some magical Workflow!

Then once you or your friend have received the link, they can then pay directly on any device, including from a browser on their laptop! It also supports Apple Pay, so if you’re on an Apple Pay supported device, you can literally pay your end of the bill in seconds.

Who Can Use It?

You can ask anyone to pay you, by using your own personal Monzo.me link. From there, they’ll be able to use their own card (even non-Monzo cards) to pay you back.

There’s no fees involved, so the amount that’s sent, is exactly the amount that is received. Of course the Monzo.me website is fully secure, accepts any major debit card, and in usual Monzo style, the money appears in less than a minute.

This update to the Monzo app, takes them even further forward in comparison to other payment providers, and even full banks. Even though it’s just a prepaid debit card at the moment, there are literally so many things that Monzo let’s you do, that no-one else does.

You can read more about Monzo on their website , and download the Monzo app for iOS from the App Store .

If you want to quickly see what a payment request looks like, then here’s an example I made up. Of course you won’t be forced to actually pay anything, but you can see what it’s like.